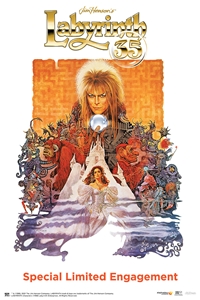 Journey into Jim Henson's magical Labyrinth when the 1986 fantasy-adventure returns to the big screen for three days only as a nationwide anniversary celebration. Frustrated with babysitting on yet another weekend night, Sarah (Jennifer Connelly), a teenager with an active imagination, summons the Goblins to take her baby stepbrother away. When little Toby actually disappears, Sarah must follow him into a fantastical world to rescue him from the Goblin King (David Bowie). Guarding his castle is the labyrinth itself, a twisted maze of deception, populated with outrageous characters and unknown dangers. To get through it in time to save Toby, Sarah befriends the Goblins, in hopes that their loyalty isn't just another illusion in a place where nothing is as it seems! Preceding the 35th Anniversary screening of Jim Henson's Labyrinth, audiences will be treated to a featurette including behind-the-scenes footage, the Henson Family, and others reflecting on the creative process behind Labyrinth.